This story about the number 1729 goes back to 1918 when G. H. Hardy paid a visit to Indian Mathematician Srinivasa Ramanujan when he was suffering from tuberculosis and was admitted to a hospital near London. Hardy had arrived in a taxi having the number 1729 and considered it as a dull number but Ramanujan… 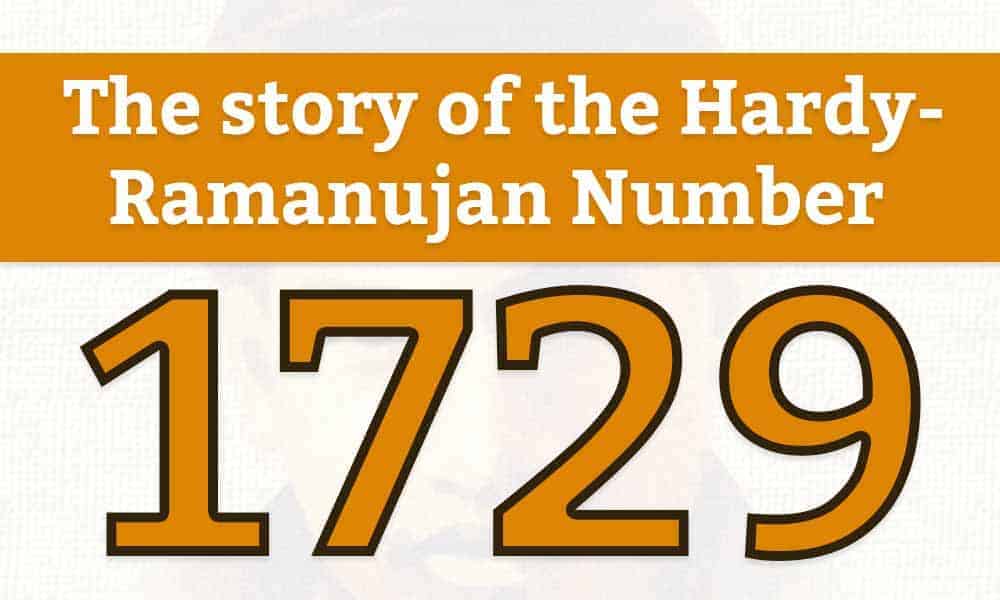 This story about the number 1729 goes back to 1918 when G. H. Hardy paid a visit to Indian Mathematician Srinivasa Ramanujan when he was suffering from tuberculosis and was admitted to a hospital near London. Hardy had arrived in a taxi having the number 1729 and considered it as a dull number but Ramanujan replied by saying “no Hardy this is quite an interesting number!” That’s how this story started.

Born in the state of Tamil Nadu, India known as the man who knew infinity was born on 22nd December 1887 Srinivasa Ramanujan has made extraordinary contributions in the fields of number theory, continued fractions, mathematical analysis.

Ramanujan was a self-taught mathematical prodigy and at a very early age, he started to work on his mathematics and discoveries as he was fascinated by numbers. He also contributed to the branch of mathematics which had all the works related to ‘partitions of numbers’.

Here’s why the number 1729 is known as the Hardy-Ramanujan Number:
So Hardy was asked a question about Ramanujan “if Ramanujan’s methods differed in any way than that of other mathematicians, and whether in his mode of thinking was there anything abnormal.”

Incidentally while answering this question Hardy shared the story about the number 1729, and Hardy answered by saying “Ramanujan’s thinking skills, memory and power of calculation cannot be reasonably called ‘abnormal’ as his skills were very extraordinary and unusual.” Hardy also added that he believed that all mathematicians think at the bottom similarly that ‘Ramanujan was no exception’.

Interesting Mathematical story : The most exceptional number that is divisible all the digits from 1 to 10

To illustrate his point Hardy then shared the story about the number 1729 and said that how Ramanujan told him that “this is not an ordinary number it’s the smallest number which can be described as the sum of two cubes in two different ways.”

Interesting Mathematical story : Hello mathematican, Give me the answer otherwise I’ll kill you

So, Hardy significantly said that after hearing about Ramanujan’s observation about 1729 he (naturally) asked if Ramanujan knew any number which was expressed as the total sum of two fourth powers in more than one way? “He (Ramanujan) replied after giving it a thought that he isn’t seeing any possible example and thought that the first number can be very large”. And after this answer, Hardy gave this number a name as “1729: the Hardy-Ramanujan number”.

Interesting Mathematical story : Can you tell me the 100 word without A B, C, and D

This contribution may not have been Ramanujan’s greatest one but definitely, it is a fascinating discovery as it’s the easiest to remember among all the other discoveries of Ramanujan. This showed not only the capabilities of Ramanujan but also his limitations.

Interesting Mathematical story : Why is 6174 the Magic Number

To end this story, I would like to say that Srinivasina Ramanujan’s birth date 22nd December is celebrated as the “National Mathematics Day”. It was declared by the former Prime Minister Dr. Manmohan Singh in 2012 when he was addressing the conference at the Madras University. Not only mathematicians but the whole world know this name and all the contributions in the field of mathematics.