Vedic Maths tricks Additions, Subtraction, Multiplication & Add.Vedic Maths tricks, Addition, Subtraction, Multiplication & Division for Class 6 to 12, is a system of reasoning and mathematical working based on ancient Indian teachings called Veda and it is fast, efficient, easy to learn. Vedic mathematics, which simplifies arithmetic and algebraic operations (Given in your NCERT… 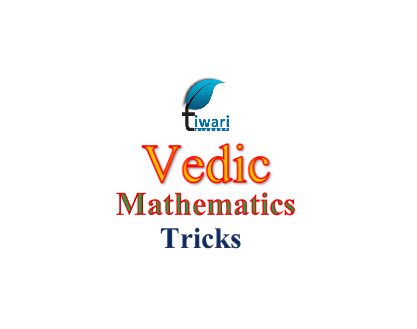 Vedic Maths tricks, Addition, Subtraction, Multiplication & Division for Class 6 to 12, is a system of reasoning and mathematical working based on ancient Indian teachings called Veda and it is fast, efficient, easy to learn. Vedic mathematics, which simplifies arithmetic and algebraic operations (Given in your NCERT Solutions), has increasingly found acceptance the world over. Discuss Your Queries here with your Friends. Experts suggest that it could be a handy tool for those who need to solve mathematical problems faster by the day. How fast you can solve a problem is very important (NCERT Exemplar problems provide the same practice).

There is a race against time in all the competitions. Only those people having fast calculation ability will be able to win the race. Time saved can be used to solve more problems or used for difficult problems.

The “Vedic Mathematics” is called so because of its origin from Vedas. To be more specific, it has originated from “Atharva Vedas” the fourth Veda. “Atharva Veda” deals with the branches like Engineering, Mathematics, sculpture, Medicine, and all other sciences with which we are today aware of. The Sanskrit word Veda is derived from the root Vid, meaning to know without limit. The word Veda covers all Veda-Sakhas known to humanity. The Veda is a repository of all knowledge, fathomless, ever revealing as it is delved deeper. Vedic Mathematics introduces the wonderful applications to Arithmetical computations (Which are included in the Class 6, Class 7 and Class 8) , theory of numbers, compound multiplications, algebraic operations, factorisations, simple quadratic and higher order equations, simultaneous quadratic equations, partial fractions, calculus, squaring, cubing, square root, cube root and coordinate geometry etc.

It helps a person to solve mathematical problems 10-15 times faster
It helps m Intelligent Guessing
It is useful not only for junior classes but Class 9 and Class 10 Maths also.
It reduces burden (need to learn tables up to 9 only)
1. It is a magical tool to reduce scratch work and finger counting
2. It increases concentration.
3. It helps in reducing silly mistakes
This subject was revived largely due to the efforts of Jagadguru Swami Bharathi Krishna Tirtha Ji of Govardhan Peeth, Puri Jaganath (1884-1960). Having researched the subject for years, even his efforts would have gone in vain but for the enterprise of some disciples who took down notes during his last days. The basis of Vedic maths, are the 16 sutras, which attribute a set of qualities to a number or a group of numbers. The ancient Hindu scientists (Rishis) of Bharat in 16 Sutras (Phrases) and 120 words laid down simple steps for solving all mathematical problems in easy to follow 2 or 3 steps. Vedic Mental or one or two line methods can be used effectively for solving divisions, reciprocals, factorisation, HCF, squares and square roots, cubes and cube roots, algebraic equations, multiple simultaneous equations, quadratic equations, cubic equations, biquadratic equations, higher degree equations, differential calculus, Partial fractions, Integrations, Pythagoras Theorem, Apollonius Theoram, Analytical Conics and so on.

Why You Should Know Vedic Maths?

Vedic scholars did not use figures for big numbers in their numerical notation. Instead, they preferred to use the Sanskrit alphabets, with each alphabet constituting a number. Several mantras, in fact, denote numbers; that includes the famed Gayatri Mantra, which adds to 108 when decoded.

Vedic Maths provides answer in one line where as conventional method requires several steps. It is an ancient technique, which simplifies multiplication, divisibility, complex numbers, squaring, cubing, square and cube roots. Even recurring decimals and auxiliary fractions can be handled by Vedic Mathematics. Vedic Mathematics forms part of Jyotish Shastra which is one of the six parts of Vedangas. The Jyotish Shastra or Astronomy is made up of three parts called Skandas. A Skanda means the big branch of a tree shooting out of the trunk.

In Vedic maths System a manual approach is preferred. The simplicity of Vedic Mathematics encourages most calculations to be carried out without the use of paper and pen. Methods like Shudh Method is applicable in statistics. This mental approach sharpens the mind, improves memory and concentration and also encourages innovation. It will be helpful in long run if we start implementing vedic Maths from Class 6 Maths.

Vedic Maths is easy to understand

Once the mind of the student develops an understanding of system of mental mathematics it begins to work more closely with the numbers and become more creative. The students understand the numbers better. Vedic Mathematics is very flexible and creative and appeals to all group of people. It is very easy to understand and practice.

It will be of interest to everyone but more so to younger students keen to make their mark in competitive entrance exams. India’s past could well help them make it in today’s world. It is amazing how with the help of 16 Sutras & 13 sub-sutras, the Vedic seers were able to mentally calculate complex mathematical problems.

Download NCERT Books and Offline Apps 2020-21 based on new CBSE Syllabus. Ask your doubts related to NIOS or CBSE Board and share your knowledge with your friends and other users through Discussion Forum.

What is Vedic Maths?

It is the way to improve calculations and make it as fast as possible.

Vedic Mathematics is useful for all classes. Standard 6 to standard 12 can use it for quicker computation.

PDF for Vedic Mathematics tricks are given for each topic. You can download it for offline use.

How are Vedic Maths Books helpful for us?

Keeping books of Vedic Maths is quite comfortable to study it frequently.